Wall of democracy
The Mahatyohar of India
Gurugram
8 May 2019

In an effort to address social sensitivity and ethnic convergence, in light of the mahatyohar of India, general election 2019,   Art Director Hunny Mor decided to create a reflection of  liberal diversity present in the cultural pool that India owes it's heritage to. 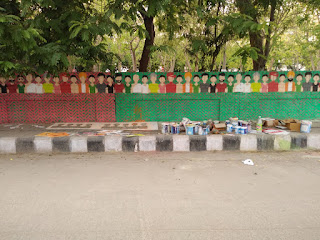 Inspired by the colors of tradition that he engaged with in his cross country travel, he  articulated his composition to bring the citizen face to face with an image that is one of the thousand faces that he has painted on the Wall of Democracy, right outside Mini Secretariat, Gurugram.

India is the world’s largest democracy.  As India became a democratic nation post its independence in the year 1947, thereafter, the citizens of India were given the right to vote and elect their leaders. In India every citizen has the right to vote irrespective of their caste, color, creed, religion, and gender. It has five democratic principles – sovereign, socialist, secular, democratic and republic.

Wall of democracy is a public art installation to spread awareness about these 5 pillars of democratic principles. Completed over a week, featuring the detail it took to personalize every character within the artwork, a thousand individual faces were painted. And further, apparel motifs that the artist has carefully laid to represent indian communities were punctuated within this public art. The vibrant colours displayed on the walls become a lively companinion to the sidewalk and are awaiting citizen participation on 12th May, 2019, by an overwhelming vote to the spirit of celebration.

Cutting corners is the best way to sustain a circumlift that can balance the parity of lifestyle upon humanity today.